Discharge mapping: several methodologies of discharge predetermination were developed at INRAE in order to establish a national map of reference discharges in every hydrographic point. The challenge is to find a consensus between them and to help stakeholders to use them.

This finalised research project was funded by Onema and span over 4 years (2008-2012). The objective was to produce a national map of mean discharges and low flows resulting from a consensus between three streamflow predetermination methodologies developed at INRAE to allow catchments stakeholders to realize the inventory and to implement the European Water Framework Directive. The study is based on regionalisation techniques from a common data set of 632 catchments.

Although an intercomparison work of the methods was done, the objective was not to determine which method was the best to rpedetermine the target variables, but rather to take into account the qualities of each of the models in order to refine as much as possible the final estimation (and without deteriorating the best estimation). 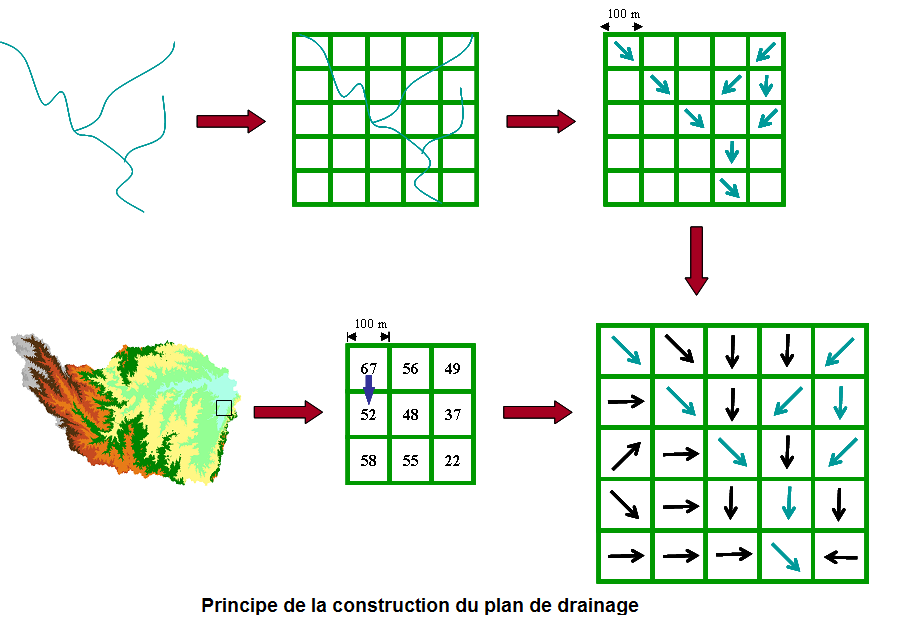 In order to allow each model to be used at its best, we used a Bayesian combination. this type of combination, in addition to the fact that it allows adding as many variables as needed (i.e. as many estimations than we want coming from the different methods), also gives a direct access to the uncertainty associated to the final estimation of the multi-model. The weighting of each method in the combination is dependent on the performance criterion of the method on a pre-defined observation dataset (632 hydrometric stations spread over the French territory).

The proposed combination, applied to the grid mesh on productions coming from the three methodologies, ensures the continuity along the hydrographic network. Regarding the agregation of streamflows, the 2010 BD-Carthage network has been used together with a 100 m-DEM, which allows obtaining the drained surface on every grid point.

For more information: see our publications