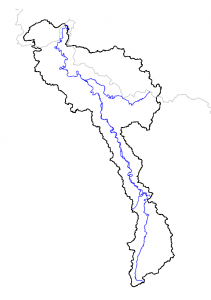 CHIMERE 21 (CHIers – Meuse hydrological Regime Evolution in the 21st century) is a research project funded by the French Rhin-Meuse Water Agency. The goal of CHIMERE 21 was to evaluate the impact of future climate change on streamflows of the French part of the Meuse basin, by using climate simulations recently produced within the fifth Intergovernmental Panel on Climate Change (IPCC) report. A multi-model approach (using four hydrological models and an ensemble of parameters) was set up and used jointly with an ensemble of climate projections coming from five different climate models, which were downscaled and unbiased with a method developed in France. The impact of climate change was quantified through the calculation of diverse indicators relative to the hydrological regime, floods and low flows. A particular attention was given to the quantification of uncertainties associated with the modelling chain.
The analysis of climate projections indicates a warmer future, especially when we consider the far future and a future with high levels of greenhouse gaz emissions (RCP 8.5 scenario). The signal is less homogeneous for precipitation. Precipitation seem to increase in the future at the annual scale. The seasonal pattern is different: while winters tend to become wetter, summer show an uncertain trend, as some projections indicate drier futures and others indicate wetter futures. Compared to a former French study, Explore 2070, these projections indicate a warmer and wetter future. Even if the more recent DRIAS-20202 projections could not be used for the CHIMERE 21 project, we performed a comparison that showed that CHIMERE 21 and DRIAS-2020 projections are consistent and both indicate a warmer and wetter future than Explore 2070.
The analysis of future streamflows indicate a likely increase of streamflows during winters as well as a low evolution of streamflows during summers, even if some scenarios indicate a possible decrease of streamflows during this period. However, spatial differences were noted over the Meuse catchment, as the increase of floods was perceived as more intense on its downstream part and the decrease of low flows was perceived as more intense for its upstream part.
Compared to Explore 2070, these results are therefore less pessimistic regarding the evolution of low flows and mean flows, but more pessimistic regarding the evolution of floods. Indeed, Explore 2070 lead to the projections of large decrease of summer and median streamflows and to an uncertain evolution of floods. This difference mainly relies on the use of new climate projections for CHIMERE 21, as they now rather indicate an increase of precipitation, conversely to Explore 2070. Therefore, within the CHIMERE 21 project, we could benefit from more recent climate projections, relying on improved models, which are consistent with a larger dataset named DRIAS-2020.
The final report aims at presenting the methods and main results of the CHIMERE 21 project. Two specific reports, one linked to the naturalisation of observed streamflows, the other one to low-flow forecasting with meteorological drought indicators, were produced in the frame of this project. Last, synthetic sheets presenting the evolution of climate and streamflows were produced for the
different sub-catchments of the Meuse basin that were modelled during this project.