GRP is a continuous lumped hydrological model, similar to conceptual models, running at the hourly time step. It was specifically developed for flood forecasting purposes. 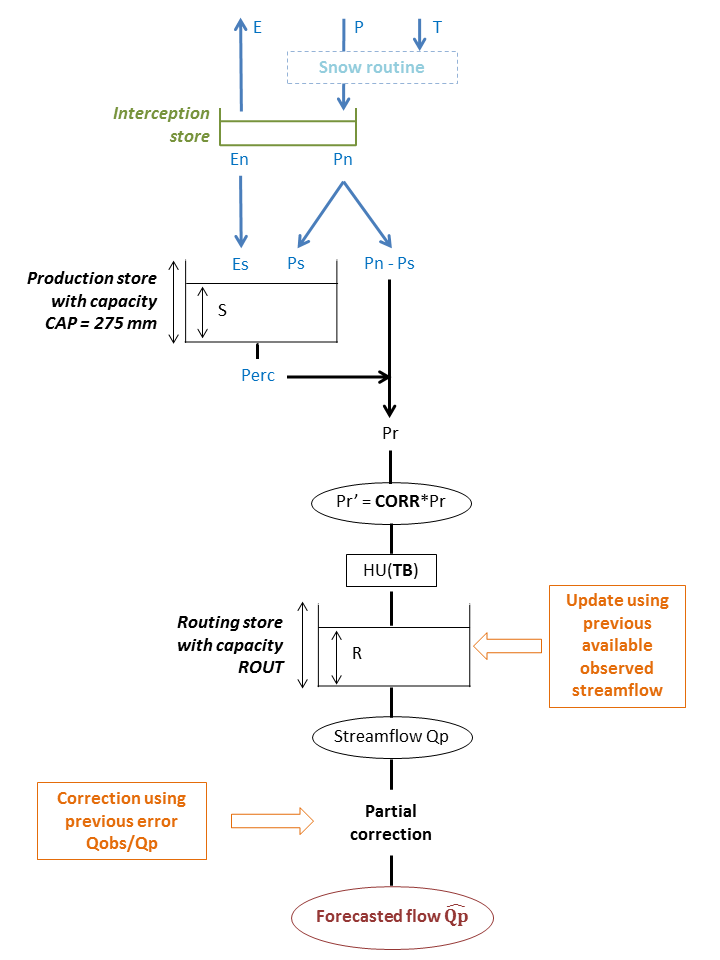 The structure of the GRP model is based on stores and has three modules:

The model has two main inputs, precipitation and potential evapotranspiration, calculated at the catchment scale. Temperature is also used in case the snow module is applied. Streamflow is the only output of the model.

The GRP model can be run in classic simulation mode, just considering meteorological inputs (rainfall, potential evapotranspiration, temperature). However, this application mode can yield large discrepancy between observed and simulated streamflow, which are not compatible with operational requirements.

In a forecast context, better results are obtained using also the information given by the last observed streamflow available at the time of issuing forecast time. We call this use of information data assimilation. In GRP, it is done in two consecutive parts:

This data assimilation is considered as an integral part of the structure of the model for forecasting objectives. In forecasting mode, observed streamflow is an input to the model in addition to meteorological inputs. GRP also requires one (or multiple) scenario(s) of future precipitation over the catchment.

The model has three parameters to optimize:

The parameters are calibrated in forecasting mode, i.e. with the application of the updating procedure. Thus parameter calibration is made for a specific lead time (horizon).

To know more: check our publications.